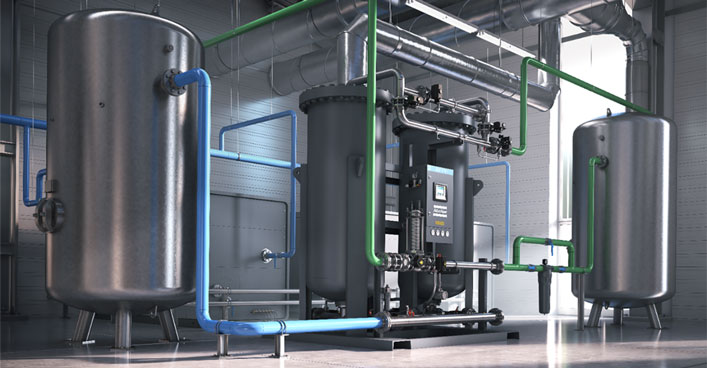 How it Works: Nitrogen Generation

Editor's Note: This post was originally published in 2014 and has been completely updated for accuracy, comprehensiveness, and new information.

For many years, bottled nitrogen supplied by gas companies has been the norm for businesses requiring nitrogen to fuel their applications. However, this trend is steadily becoming outdated; there’s something about being locked into year-long contracts and skyrocketing gas prices that businesses simply don’t like. What’s replacing bottled N2, you might ask? On-site nitrogen generation!

But how does nitrogen generation technology work? To clarify, nitrogen generators aren’t actually creating nitrogen; rather, they use the nitrogen already present in the air and concentrate it by removing extra molecules. Typical air composition is 78 percent nitrogen and 21 percent oxygen. There are also other molecules in lesser amounts, including carbon dioxide, argon and water.

There are two main methods for removing the extra molecules from the air. One of these is pressure swing adsorption (PSA) technology, which filters out unwanted (i.e. non-nitrogen) molecules. How it works is simple: when the air is drawn through the intake valve, it is sent through a carbon molecular sieve (CMS). The CMS has tiny pores across its surface that are the perfect size for oxygen molecules. Because nitrogen molecules are larger than oxygen molecules, they do not adsorb to the material and pass on undeterred through the CMS. (In various experiments, nitrogen molecules have been found to have a diameter about .2 Angstrom longer than oxygen. An Angstrom is about one-ten-billionth of a meter.)

Similar to some desiccant dryers, PSA nitrogen generators have two chambers: one with fresh CMS for the current adsorption process, and another that swings to low pressure to desorb oxygen from saturated CMS. PSA nitrogen generation can produce up to 99.999 percent pure nitrogen.

The second key method to “generate” nitrogen is membrane nitrogen generation. The membranes are a bundle of small, hollow polymer fibers with small pores across the surface.  Because oxygen is smaller than nitrogen, it preferentially passes through these pores, eventually leaving only nitrogen. This process is called permeation. Membrane technology can produce up to 99.5 percent pure nitrogen.

Onsite nitrogen generation technology offers many benefits for end users – what we call the P.R.I.C.E. Benefits of On-Site Nitrogen Generation. Learn more about these benefits or contact an Atlas Copco representative today to explore our range of nitrogen generators.