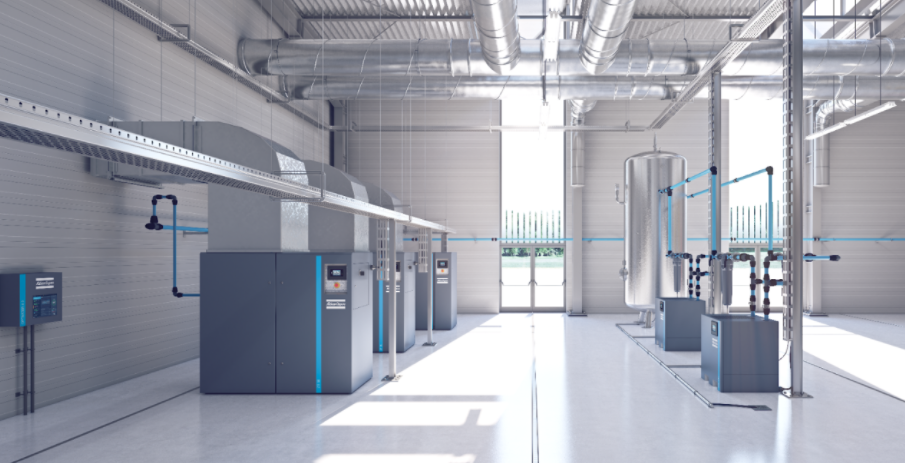 Compressors Galore! Breaking Down the Different Compressor Types and Technologies

If you’ve been in the compressed air industry for any amount of time, you know that the variety of compressors available can be overwhelming. From oil-free to oil-injected, dynamic to displacement, fixed-speed to VSD (Variable Speed Drive), the options can make your head spin. And we haven’t even mentioned the different technology types!

That’s why we’ve decided to break it down for you. Instead of scratching your head, simply read on to discover the details surrounding the different types and technologies of air compressors.

Dynamic Compressors. Also known as centrifugal or turbo compressors, these compressors have an axial/radial design and operate at a constant pressure. Blades draw in air on a quickly rotating compression impeller; next, gas is discharged via a diffuser, which allows the energy to be transformed into pressure! You’ll find these compressors in applications that need very large volumes of air, such as in power generation and chemical/petrochemical plants.

Displacement Compressors. Common in industrial settings, positive displacement compressors work at a constant flow (rather than constant pressure). Air is drawn into the compressor chamber; as volume of the chamber is decreased, air is compressed and the pressure of the air increases. Once the air reaches its designated, built-in pressure ratio, the valve opens and the air is discharged. Piston, screw, and scroll compressors are examples of displacement-type compressors.

Screw Compressors. Air enters via an inlet valve and is funneled through twin helical screws, known as rotors, that pressurize the air. The screws turn, the volume decreases, and air pressure increases. They are capable of being run continuously and are considered a pillar of the industrial world.

Scroll Compressors. A single spiral-shaped rotor oscillates against a similar fixed spiral. As this oscillation happens, the cavity trapping air between them becomes progressively smaller. This decrease in volume forces the fixed volume of intake air to increase in pressure.

Other compressor types include tooth and vane compressors, though these are less common than the compressors described above.

Whether or not you need an oil-free or oil-injected compressor depends heavily on your application. For applications like food and beverage, medical, and pharmaceutical that require extremely clean air with no chance of contamination, oil-free compressors are advantageous. However, for applications in general manufacturing or automotive which can tolerate oil coming into contact with the product or process without issue, an oil-injected compressor can be perfectly suitable.

Fixed speed compressors run at one fixed speed and are very efficient when operating fully on load 100% of the time. When the unit unloads, however, it spends some of the time turning the motor and using energy while not producing compressed air – which is wasted energy. A VSD, or variable speed drive unit, turns the motor relative to the amount of air required. This means that if the demand increases, the motor speeds up; if the demand decreases, the motor slows down. Only the energy required to produce the air is used, meaning less energy is used and life cycle cost is reduced.

Want to learn more about air compressors? Visit us at www.atlascopco.com/air-usa!