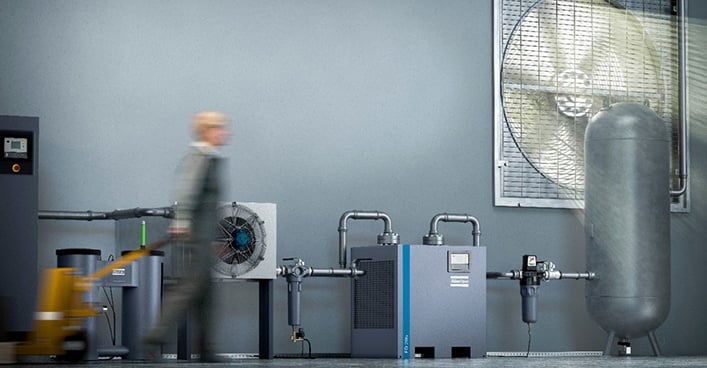 What are air receivers?

Receivers are used to provide compressed air storage capacity to meet peak demand events and help control system pressure. Basically, they store a volume of compressed air for use when it’s needed and stabilize pressure in the air system regardless of the equipment's varying demand.

When are air receivers used?

Air receivers should be used in every compressed air system and are most effective for systems with varying compressed air flow requirements, such as intermittent peaks in consumption. In these scenarios, a smaller compressor may be used in conjunction with a large receiver for better capacity control efficiency.

Air receivers can also be used to:

There are differing points of view when it comes to the location of a primary air receiver in a plant air system. The system can have a receiver between the compressor and dryer, after the dryer or both.

If the receiver is located before the compressed air dryer, the receiver will provide a slight amount of additional radiant cooling and drop out some of the condensate and entrained lubricant. However, the receiver will be filled with saturated air. If there is a sudden demand that exceeds the capacity rating of the compressor and matching dryer, the capacity of the dryer will be overloaded, resulting in a higher pressure dew point. The benefit to having a tank before the dryer is its ability to stabilize the airflow into the dryer especially with start/stop or load/unload compressors.

Installing a receiver after the dryer will allow a reservoir of dry compressed air to accommodate any fluctuations in the system demand.

The recommended best practice is to have a control receiver before the dryer. In addition, a dry receiver should be located after the dryer and filter for the primary receiver capacity.

How to properly size air receivers

A good rule of thumb for sizing air receivers is to allow four gallons for each CFM of compressed air for fixed speed compressors and one to two gallons of storage for variable speed compressors.

Although some might be tempted to take on a DIY task of building an air receiver, there are several legal regulations and the project can also pose serious safety risks. It’s recommended that you purchase an air receiver from a reputable air compressor manufacturer for a suitable solution. For more information, contact an Atlas Copco expert.