If all aspects of the railroad industry ascribed to these arguments, locomotives would still be steam driven. While steam technology still works, there has been too much advancement in motive power for the industry to ignore. And though the same can be said for compressor technology, the less efficient, direct driven, reciprocating compressor remains the prevailing technology in locomotive air brake systems today.

Based on Archimedes’ screw principle developed in Ancient Greece, rotary screw air compressors have become the most widely used air compressor type for standard industrial applications for a number of reasons, including its simple operating design. Designed for the unique requirements of the railroad industry, from extreme weather fluctuations to easy access for maintenance, rotary screw technology is more efficient and reliable than reciprocating compressor technology.

Two mated helical shaped screws spin at a high speed; the two screws do not make contact with each other, but rely on oil injection to seal, lubricate and cool the screw element. As the screws turn, air is ingested into the compression chamber through an air inlet filter.

With a dedicated Railway Competency Center and state-of-the-art production facility that focuses solely on railway products, Atlas Copco is a trusted partner to the railway industry; learn more about Atlas Copco air compressors for railway applications. 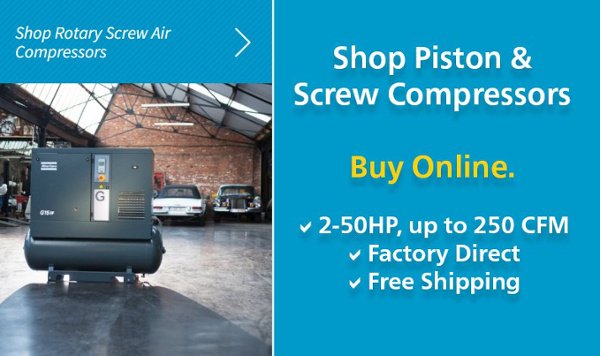