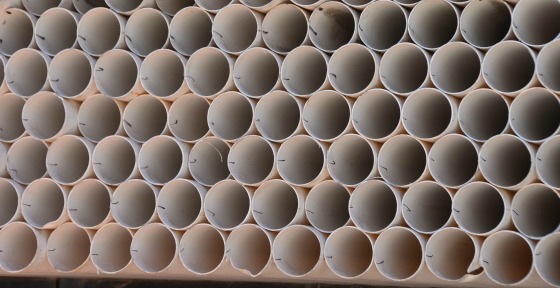 First patented in 1913, polyvinyl chloride (PVC) quickly became a popular material for insulating wiring, particularly during WWII. Over the years, PVC was improved to be more light and chemical resistant and became a staple in the construction industry. Eventually, industries from IT to textiles used the material.

PVC does not refer solely to pipes. It can be used as a protective coating for fabrics, wires and inflatable structures, as well as a material for pipes. PVC pipes are popular because they are cheap and durable for many applications. Lawn irrigation, plumbing and drainage are a few common uses for the material. However, PVC piping should never be used in compressed air systems.

Since the 1980s, Occupational Safety and Health Administration

(OSHA) has banned PVC piping in most compressed air applications (as well as other uses, such as residential water piping), and for good reason. Pressure, heat and lubricant aerosols are passing through pipes as soon as air leaves the initial compression stage. Each of these can have a damaging effect on the material, ultimately resulting in problems — sometimes catastrophic.

Compressed air systems can generate various levels of pressure, depending on the application demand. This pressure can easily exceed the strength of PVC piping, resulting in explosions that eject shrapnel at employees. Heat and lubricants can also wear away at the pipes, creating weak spots that, when combined with pressure, can burst.

PVC poses numerous unnecessary risks to employees. There are many durable, safe options on the market, including aluminum, copper and stainless steel. Of these, aluminum is the best choice. It is easy to configure, doesn’t require heat permits and doesn’t require welding and cutting.

Regardless of which pipe material you choose, be sure none of your compressed air systems are using PVC pipes. It’s not in compliance with OSHA and it’s not in the best interest of your employees. If your system still uses PVC piping, contact us today. We can help you replace your system with a safe, OSHA compliant alternative.