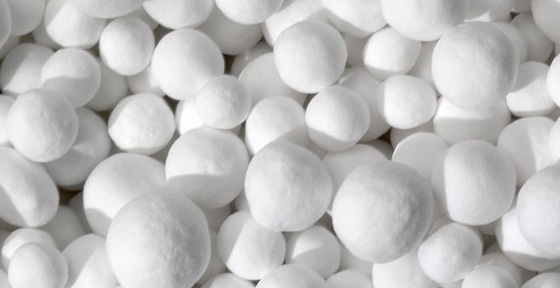 There is really nothing new about the rotating drum desiccant dryer, but there is a lack of education in the market regarding the benefits and how the technology works.

The compressor’s main output stream is directed into a drum that is impregnated with desiccant material (the little white balls in the picture above). Moisture has a natural affinity for the material and adheres to it, drying the airstream to a final pressure dew point that can be as low as -50 degrees F under certain conditions. The drum slowly rotates (about seven revolutions per hour) with three-quarters of the drum removing moisture from the compressor’s main air stream at all times.

Simultaneously, a side stream of air is directed from the compressor to the remaining one-quarter of the drum to drive off the accumulated moisture. The air stream is hot (over 300 degrees F) as a natural consequence of being compressed, and this heat evaporates the moisture that’s been captured by the desiccant, regenerating the desiccant material.

Importantly, that side air stream is recaptured, cooled and merged back into the main air stream, regenerating the desiccant without the waste of purging. The only energy consumed in this process is equal to 1/8 hp (about as much energy as a light bulb) used by a small gear motor that turns the drum.

The typical twin-tower desiccant dryer functions differently. While one tower captures the moisture by the adsorption process, the other tower’s desiccant is regenerated with a stream of compressed air that purges the accumulated moisture. The twin tower method works, but can consume as much as 15-20 percent of the compressor’s rated capacity to regenerate the desiccant. Air that you have already paid to make is evacuated into the ambient air of the compressor room and lost.

A twin tower desiccant dryer has a lower purchase price, but significant disadvantages. Energy is wasted, the compressed air volume delivered to the facility is reduced by 15-20 percent and due to the constant switching between towers and purging of vessels, high maintenance costs are often incurred.

Refrigerant air dryers function by reducing the temperature of the air stream so that the water vapor in the system condenses out. Like a rotating drum desiccant dryer, refrigerant dryers have no purge. But, this type of this type of dryer can only produce pressure dew points as low as +37ºF.

To cool the air stream a refrigerated dryer uses a refrigeration circuit to remove the heat from the system. This can take significant amounts of electricity to continuously operate the unit.

Want to learn more? Contact us to discuss your specific dryer needs.