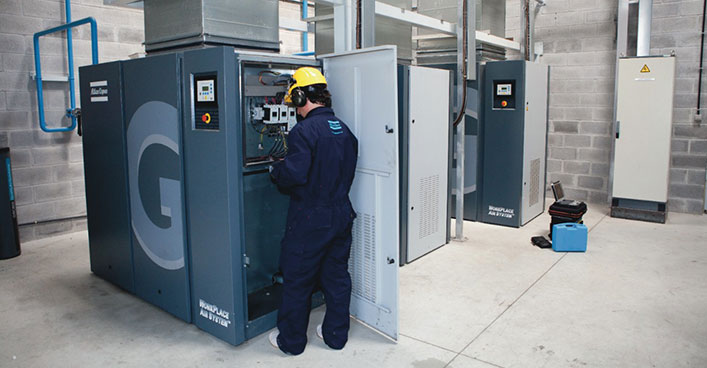 Let’s face the facts — all machines generate sound and vibration. Noise levels are affected by different properties within the compressor room, from the size of the room to the materials used for walls and ceilings, and the presence of other equipment.  While engineering and quality of materials can damp the sound and vibration of individual pieces of equipment, this article will focus on how the design of the compressor room can attenuate the sound radiated into other parts of the plant.

Most sound proofing materials will have an Sound Transmission Class (STC) rating to quantify how well a material attenuates airborne sound. STC is a common measurement used to give designers an estimate of attenuation; however, the actual amount of attenuation can vary based on sound frequency. For instance, methods effective for mitigating sound at higher frequencies like high-speed drills may not be as effective on lower frequencies such as home theaters or idling trucks. The same principle can be applied to damping equipment vibration because sound is inherently caused by vibrations.

Certain types of insulation have better absorption properties. For example, mineral wood (Roxul) insulation works better than fiberglass and spray foam insulation.  However, spray foam is very effective in sealing open gaps, which would otherwise allow the sound to have a direct path through the wall. These gaps are commonly found where plumbing or electric is run from one room to another. It is advised to not compress the insulation as this will reduce both its thermal and sound insulation effectiveness.

While it can be costly to implement all of these techniques and logarithmic nature sound volume can reach diminishing returns at a certain point, it is worth investing in cost effective techniques that fit your budget and sound attenuation needs.

Have you tried any noise damping tactics in your facility? Leave us a comment below, and let us know your best practices for mitigating sound.